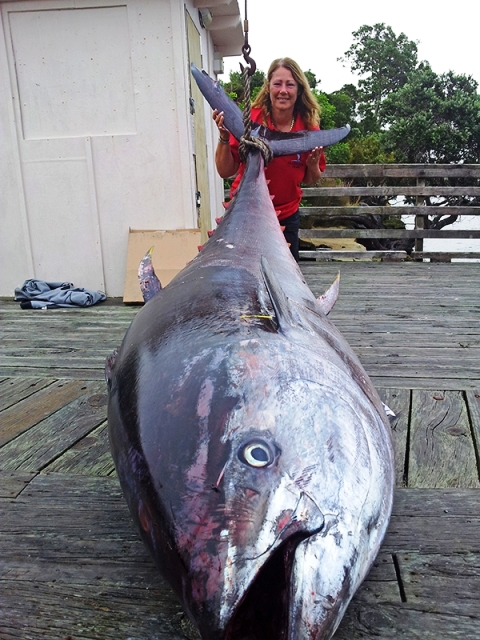 Original tekst.
Biggest Fish Ever Caught by a Woman Angler in New Zealand

Update: Donna Pascoe caught a 907-pound beast, the biggest fish ever caught in New Zealand by a woman angler. It was recently approved by the IGFA as the all-tackle record and the women’s 60 kg (130 lb) line class record for Pacific bluefin tuna (Thunnus orientalis)

According to the New Zealand Sport Fishing Council, Donna Pascoe caught the biggest fish ever recorded by a woman angler in New Zealand as well as a pending all-tackle record that, if approved, would make it by far the largest Pacific bluefin tuna ever caught on rod and reel.
On February 19, Pascoe reeled in the 907-pound bluefin in the New Zealand Nationals on her boat Gladiator, 34 miles north of the country.
„I hooked up at 9:10 a.m. with the reel screaming,“ Pascoe says. „The fish never surfaced, so we had no idea what was on the other end. After three hours, the fish surfaced and the skipper yelled ‘tuna, world record!'“

She says that she has turned in her documentation to the NZ Sportfishing Council records officer, which will be sent off to the IGFA. It has the potential to become the IGFA world record for the womens 130-pound as well as the all-tackle record for Pacific bluefin tuna — she says this is „even better because it beats all the boys.“
If the IGFA confirms her all-tackle record, it will plow over the original record by 130 pounds.
This monster tuna was definitely a battle for the 56-year-old Pascoe, but she kept her cool.
„The line was peeling out like it was attached to a freight train,“ she says. „As usual, I was pretty nervous that I might get spooled. Thankfully, the fish stopped running and I was able to get a bit of line back in.“
After a four hour fight, Pascoe didn’t even feel the burn with her adrenal-glands pumping like a pistons in a hot rod.
„Once we had the fish, I was so excited that my arms and legs could have fallen off and I wouldn’t have noticed,“ she says. „I think adrenalin is a great thing and it certainly kept me going.“
Seeing the steady rise of the weight of Pacific bluefins, one can only suspect a grander in the near future.