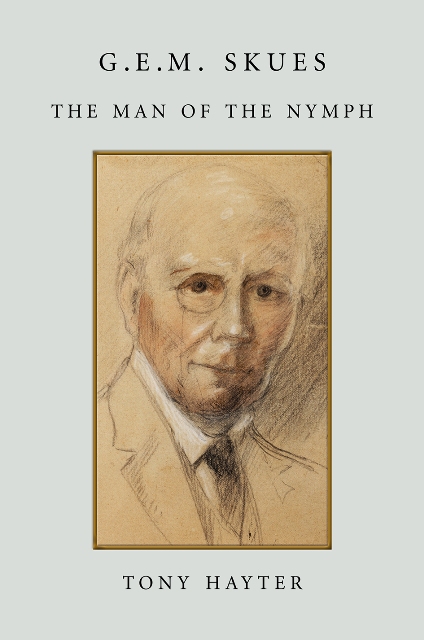 Tony Hayter caught his first trout on a fly in 1953 and published his first angling article in Trout and Salmon in 1955 while still at school. A professional historian, he has edited, reviewed and published in the area of military history and other subjects, and since retiring has recommenced writing about angling. He had long been puzzled by the fact that no biographies of the two leaders in the development of chalk stream fishing, Halford and Skues, had ever been written, and in 2002 he began to address this lack by publishing F.M. Halford and the Dry-Fly Revolution. With G.E.M Skues: A Biography he closes the gap once and for all. Tony now lives with his wife in a village in the south of Wiltshire with a chalk stream in the garden, where the trout, being part of the family, are admired and not fished for.

G.E.M. Skues: The Man of the Nymph by Tony Hayter
‘…the name G.E.M. Skues will forever be associated with nymph fishing throughout the world as long as there are anglers who wish to catch fish’
– Frank Sawyer, legendary nymph innovator, author and river keeper

In 2002 Dr Tony Hayter published his widely acclaimed biography of F.M. Halford, who did more than any other angler and author to codify the practice of dry-fly-fishing for trout on chalk streams. Now he follows with his magisterial biography of G.E.M. Skues – the most innovative fly-fishing angler of modern times. Skues spearheaded and near-singlehandedly developed the technique of below-surface fly-fishing for trout with nymphs. His pioneering example is now followed by anglers worldwide.

During the six years of research and writing for this volume, Tony Hayter has travelled widely in Europe and the USA to unearth a treasure trove of original and hitherto unpublished material, which throws new light on the life of this great man. Packed with fascinating detail, the book explores many hitherto unrevealed facets of Skues’ life and for the first time sets into proper perspective his early clash with Halford, as well as his inevitable collision with the diehard dry-fly purists in 1938. Also detailed for the first time through voluminous unpublished correspondence is the major influence Skues had on anglers in Europe and the USA, culminating in his election as an honorary life member of the New York Anglers Club in 1927.

Throughout the book there runs a strong narrative thread holding the reader enthralled. Tony Hayter’s book is a singular achievement that will long stand as the definitive biography of G.E.M. Skues.